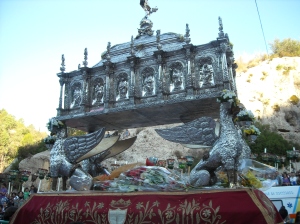 The last Sunday of every August, the Catholics of Noto, Sicily, celebrate a devotional feast in honor of San Corrado of Noto, a hermit and member of the Third Order of St. Francis, who lived in the 13th century.

During my stay at the Santuario della Madonna della Scala (2010-2011) I had the grace to attend several processions in the Saints honor.

San Corrado is little known even in the Order, but he is a powerful saint, who still works miracles for his faithful; appears to them, gives them counsel, and inspires them to seek first the Kingdom of God.

The photo, above, I took, during the procession to the grotto of San Corrado, in the summer of 2010.  The silver beaten Ark, contains the relics of the Saint: his bones, beard, and some of his clothing.

I will be eternally grateful to God, that in December of 2010, the Bishop of Noto, by decree, granted me the status of a hermit in the diocese, the first such recognition of hermit since about the time of Napoleon, though others have lived in the diocese without official recognition. I obtained this favor, I  believe, through the intercession of St. Corrado, from whom I specifically asked it, when I first wrote the Bishop of Noto.

Here are some more photos:  First, the Bearers of St. Corrado bearing the saint’s Ark, in the piazza in front of his ancient Hermitage.

Second, the Facade of the Church of San Corrado, at the Hermitage, just outside Noto: 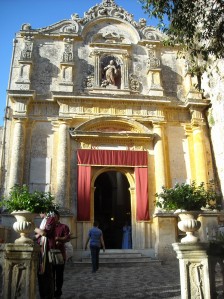 Next, the bearers carrying the Ark along the narrow path leading up to the Church:

Next, the Ark is borne in procession at Night time, in the City of Noto, on his feast day, and on the Last Sunday of August (here seen in 2010):

Publications of the Franciscan Archive